The names of Olney and of John Newton have been connected since the former slave-trader was curate at St Peter and St Paul’s church between 1764 and 1780. Newton’s friendship enabled William Wilberforce to become the greatest advocate of the abolition of the slave trade. Later, they worked together to establish a home for freed slaves in Sierra Leone – this is how the villages of Newton and Wilberforce came to being.

“Amazing Grace” is a Christian hymn written by poet and curate of St Peter & St Paul Olney, John Newton (1725–1807), published in 1779. With a message that forgiveness and redemption are possible regardless of the sins people commit and that the soul can be delivered from despair through the mercy of God, “Amazing Grace” is one of the most recognizable songs in the English-speaking world. 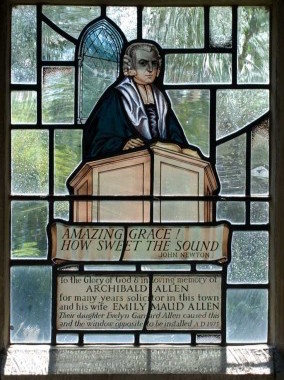 Newton wrote the words from personal experience. He grew up without any particular religious conviction but his life’s path was formed by a variety of twists and coincidences that were often put into motion by his recalcitrant insubordination. He was pressed into the Royal Navy and became a sailor, eventually participating in the slave trade. One night a terrible storm battered his vessel so severely that he became frightened enough to call out to God for mercy, a moment that marked the beginning of his spiritual conversion. His career in slave trading lasted a few years more until he quit going to sea altogether and began studying theology.

Ordained in the Church of England in 1764, Newton became curate of Olney, Buckinghamshire, where he began to write hymns with poet William Cowper. “Amazing Grace” was written to illustrate a sermon on New Year’s Day of 1773.

John Newton was later to become one of the founders of the Christian Missionary Society which held its first meeting on the 16th January 1783.